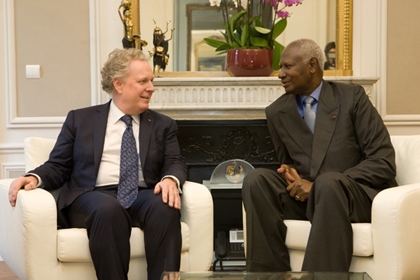 During their meeting, Premier Charest first gave an update on the preparations for the next Summit, to be held from October 17 to 19, 2008 in Quebec City, which will close the 400th anniversary of the founding of the city.

Jean Charest and Abdou Diouf then recalled the importance that the Francophonie and its partners give to TV5. Together, they emphasized the multilateral nature of this Francophone generalist channel, which is part of La Francophonie.

Finally, they also discussed the place of the French language on the international scene, in international organizations and at the Olympic Games.